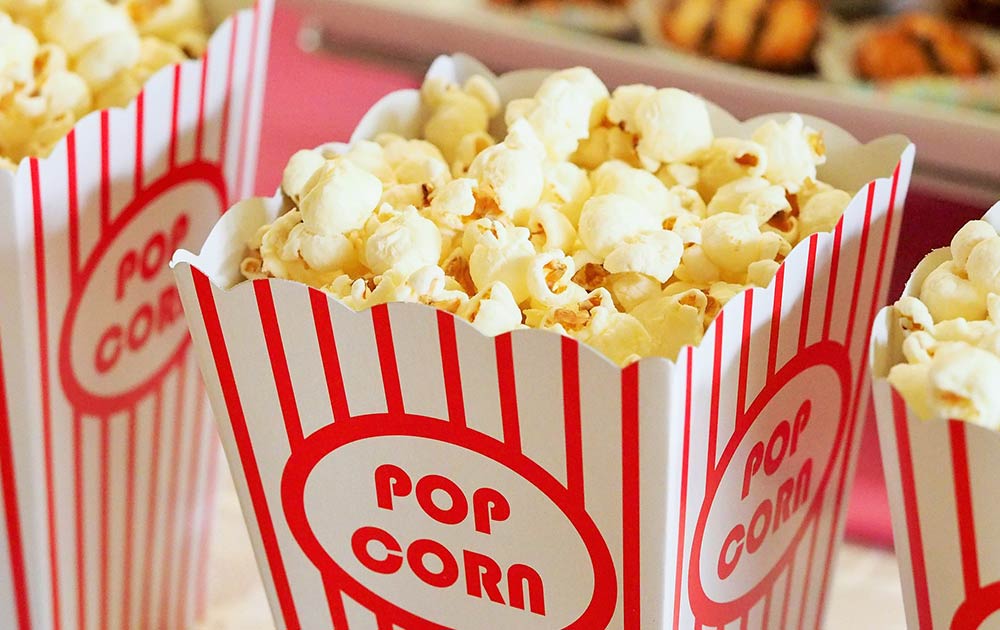 Who doesn’t love a night cuddled up on the couch, a big bowl of popcorn for the family to share, and a favorite movie on a big screen TV? If there is another family activity that gets so many thumbs up across America, we can’t think of it! That’s why the second Friday night in June is dedicated to this much loved pastime, and this year National Movie Night falls on June 10th.

Spending a night with the family, whether you’re watching something on a streaming service like Disney+ or Amazon Prime Video, is a great way to share laughter (or tears!) over a family-themed film. Now that pandemic restrictions are largely lifted across the country, consider making June 10th a night out with everyone. Go to your favorite pizza restaurant first, then get tickets to a nearby movie theater and watch one of the titles on offer below.
In this post, we offer some titles that range from famous classics (“Toy Story,” anyone?) to just-released animated movies that every child loves. You’re sure to find something for every age group here, whether it’s a new take on a fairy tale or a Hollywood comedy that just came out this spring. (At the end of this article, we offer a link where you can find even more of the newest, most raved about movies for children, grandparents, and every audience member in between).

So, pass the popcorn, dim the lights and let the good times – and the reels – roll!

This classic comedy has been reworked for the 21st century, with a diverse cast starring Gabrielle Union and Zac Braff. These two parents are raising 10 children, and lots of laughter and chaos come with the territory. This film is perfect for young audiences and grandparents alike and is available to stream on Disney+.

This is the next movie in this children’s animated series, with spooky characters and lots of laughs. Our fearless vampire hunter Dr. Van Helsig accidentally turns Johnny into a monster. Oops! Lots of fun for young children, this next installment in the Hotel Transylvania series is streaming on Amazon Prime Video.

This live action movie was made by acclaimed director Richard Linklater, who won praise for his earlier movie “Boyhood.” “Apollo 10 & 1/2” tells the story of the moon landing, not just from the perspective of the astronauts, but also from the point of view of a young boy watching events unfold back on Earth. This is an original film produced for Netflix and is available on the streaming service now.

This animated sequel was released in early April, and favorite characters from the original movie are back, including Knuckles and Tails. It may still be in a movie theater in your community, but if not, check all streaming services. It is sure to turn up on one of them soon.

This is another animated film made by DreamWorks Animation. It tells the tale of a gang of animal crooks from the New York Times bestselling book series of the same name, by Aaron Blabey. “The Bad Guys” are a gang of animated characters including a snake, a wolf, a shark, and others who finally get caught after one too many bungled heists and other jobs. Much hilarity ensues as they strike a deal to go straight in order to avoid prison time – these former bad guys decide to do good! (At the time of this writing, “The Bad Guys” was playing in theaters across the country, so gather up the family and head out for a fun night. “The Bad Guys” may be available for streaming by National Movie Night if you prefer to stay home. Check your local listings and online streaming guides).

This favorite animated cartoon was released in early May, and might still be playing in some theaters, but should certainly be on streaming services or network television by June 10th. In this chapter of the classic about the dog with the big appetite, comic Pete Davidson (of SNL) voices our canine hero. A trainer gets a hold of our kooky canine, and tries to tame his appetite – can he manage such a challenge? Children of all ages love Marmaduke, both the comic strip that started it all and the movies that star him.

Everyone is familiar with the fairy tale of Cinderella, and the Disney movie made from the story. But this very hip, very modern version is sure to thrill anyone who loves hip hop and pop music, and plenty of energetic dance scenes. This version is set in New York City and tells the story of El, a young man from Queens who longs for stardom as a sneaker designer. Along the way, he meets Kira, the daughter of a basketball superstar, and plenty of romance, setbacks, and happy endings ensue. This is a terrific family-oriented musical that will have everyone tapping their toes. It’s a Disney+ original and is available on their streaming service now.

There are so many ways to watch movies today that you’re sure to find something to please the whole family on June 10th. Let the children choose one, perhaps, and the grandparents choose another. That way you can make the night a true celebration of all things cinematic, and make the evening a double bill. If you decide to stay in for your National Movie Night, all you have to do is make the popcorn. Happy viewing!

For even more movie titles to check out for June 10th, go to: